Kamloops Travellers Dance on Top of the World 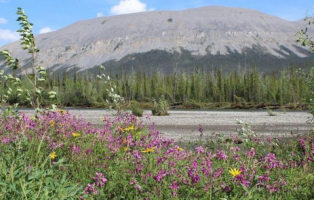 When you’ve already travelled to 108 Mile House to square and round dance, Kamloops couple Merv & Sandy Meyer figured they’d just head farther up the road to another dance—in Alaska. After dancing up a storm at the 57th South Cariboo Jamboree, they drove their pickup and canopy along the scenic highways into a wildlife menagerie.

Encountering black bear, moose, elk, caribou, many buffalo, whitetail and mule deer, Sandy Meyer said “at one point, only steps away from our truck, was a grizzly bear munching on the grass”. Their main goal was to reach the Alaska State Square & Round Dance
Festival in Fairbanks, just 4 days away. Sandy explained, “On June 21st, the longest day of the year, there was a ‘Midnight Sun Dance’. This is where the square dancers can earn a ‘fun badge’ for dancing in the sunlight at midnight.”

Arriving at the Festival, both the Meyers were invited to call and cue on several occasions to an enthusiastic and appreciative floor of dancers. Merv calls square dances and Sandy cues round dances (choreographed ballroom). The crowd enjoyed dancing to one of the Meyers’ favourite duet singing calls. Merv enthused “I was very pleased to get a chance to dance to the featured professional caller Marshall Flippo, because one of the first singing calls I did was from one of his records”. Mike Preskitt of Anchorage, Alaska, was the featured cuer.

The Festival was co-hosted by the Santa’s Swingers, from the town of North Pole and the Prospector Squares of Anchorage. In fact, the Meyers visited North Pole and Santa’s House, just 22 kilometres south of Fairbanks. Sandy said “honestly, I didn’t know a ‘real’ North Pole and a Santa Claus House existed–I was so excited to actually be there.”

Although the Meyers’ main objective was to reach the Alaska Dance Festival in Fairbanks, they decided to continue on, following the “Top of the World Highway” to Dawson City in the Yukon. From there, they traveled the famous Dempster Highway reaching Inuvik, Northwest Territories. This is the farthest point north accessible by road in the summer, some 750 kilometres each way on a gravel surface. Inuvik is 328 km north of the Arctic Circle.

Another highlight of their trip was to take a dip in the steamy waters of Liard Hot Springs. There, the mineral water temperatures range from 108 degrees to 126 degrees F. In Dawson City, they took in two events, one being a tour of the beautifully restored Grand Palace Theatre.  The other attraction was the “Greatest Klondiker Contest,” where 3 actors portrayed early pioneers  from the Gold Rush era (Sam Steele won the contest). In Whitehorse, they toured the skillfully restored Klondike Stern-wheeler.

There’s no doubt that the Meyers love square and round dancing because, upon return from Alaska, a dance festival at Parksville on Vancouver Island was the next destination. “We love to fit dancing into our travels,” said Merv Meyer with great conviction, explaining “we’ve made friends from one end of the continent to the other, who also enjoy this wonderful healthy recreation.” Merv and Sandy Meyer encourage Kamloops area residents to join the fun and try today’s style of square dancing this Fall. The Kamloops Square Dancers club presents two free new dancer  sessions September 12 & 19 at 7:30 pm in the Desert Gardens Community Centre, followed by 10 more fun sessions by registration. The Sept. 12 & 19 free nights are casual attire, no commitment and no obligation.