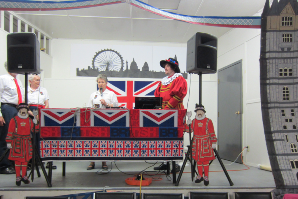 Square dance season has ‘finished’ and the Meyers are on the road again. Williams Lake’s Square Dancers, the ‘Whirlaways’ celebrated their 57th Jamboree on May 22nd to 24th.

The theme was ‘Jolly Old England’. The decorations which included scenes of Cricket players, Buckingham palace, the Black Prince Tavern, Sherwood Forest, and the Tower Bridge complete with a London taxi and a double decker bus, were all done by Mary Anne Turner. They were absolutely fabulous and certainly brightened up ‘The Long House’ hall where the event was held.

Dustin McGifford of Penticton, dressed as a ‘Beefeater’, was the featured caller. He, along with local caller & cuer couple Nick & Mary Anne Turner, provided 8 ½ hours of dancing fun, keeping to the ‘English theme’ with music artists like ‘The Beatles’, ‘Olivia Newton-John’, and songs like “Streets of London”, “My Old Man’s a Dustman”, and “A Letter to the Beatles”. Dustin’s dad, Darcy was dressed as ‘King Henry VIII’ and his mom, Beth, was an ‘English suffragette’. Many of the other dancers wore costumes fitting to the English theme. There were 7 squares attending the dance on Saturday.

On Saturday afternoon, ‘High Tea’ was served, in beautiful proper tea cups, along with English scones of various flavours. There was even strawberry jam and a ‘dollop’ of cream to go with the numerous scones set out on a long table. Before anyone was ‘allowed’ to have high tea, a ‘Royal Guest’ (dancer Bill Cave, dressed as the queen, complete with tiara & pearls), gave a British etiquette lesson on how to eat scones. It was all very amusing & charming.

At dinner time, 60 people sat down to a delicious roast beef dinner complete with rolls, salads, vegetables and a very yummy gravy. Yes, of course there was dessert as well! After dinner had settled, Mary Anne cued some interesting pre-rounds. This was followed by more of Dustin’s fun mainstream dancing.

A short break in the evening dance treated the dancers to a very entertaining skit that Mary Anne had arranged and also took part in. It involved 14 of the dancers. They were all dressed in black and white attire, with bells fastened to their knees, and wearing black top hats. They jingled their way through a dance, using hockey sticks to do a lot of ‘face-offs’ and ‘cross check’s, banging their sticks on the floor and against the opposite dancer’s stick, to the beat of the music. It was very well done and most enjoyable.

To finish off the evening, tea, coffee, ice-tea and a large assortment of goodies, including butter tarts and a delicious homemade carrot cake decorated with the British Union Jack flag were set out on tables for everyone to help themselves.

Sunday morning concluded the weekend with a continental breakfast and casual dancing until 11:00 a.m.