Dancing In The Stars 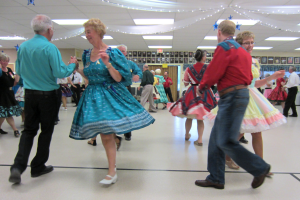 Do you wonder what you missed at the Prince George Jamboree on June 6th and 7th? The weather was absolutely perfect! The stage at the Hart Pioneer Senior Centre was beautifully decorated with shimmering blue streamers, large silver stars hanging from the ceiling, and background curtains with clusters of stars on them.

True to the theme ‘Dancing in the Stars’ there were cloud-like ceiling garlands and blue stars strategically placed. Susan Hunter and her decorating committee did a wonderful job!

Friday evening started at 7:30 with pre-rounds and was followed with mainstream square dancing from 8-10:00. Callers and cuers from various clubs took part, with Sandy & Merv Meyer of Kamloops doing one of their favourite singing call duets “We Got Love”. There were 6 squares on the floor having a good time. It was great to see so many familiar faces. Everyone had a quick visit and many hugs (yellow rocks) were being shared.

A Saturday mainstream workshop from 1 – 3 p.m. had the dancers in stitches a great deal of the time. Jerry Jestin, the featured square dance Caller AND round dance Cuer is notorious for his
entertaining ways, and for keeping dancing FUN and EXCITING.  Internationally known, Jerry was raised in Canada, but spends his winters in Yuma, AZ & Dallas/Fort Worth, Texas, and his summers in Alberta. He has been calling since 1967. Jerry is also famous for his creative choreography, his use of a wide variety of music, and he has recorded for several Square Dance record labels.

At 3:30 some of the dancers went to dance around Mr. PG. to work up an appetite. ‘Mr. PG’ is a wooden statue, first constructed in 1960 as a symbol of the importance of the forest industry to Prince George. That year he took part in the Prince George May Day parade and he could speak and bow. Three years later, he entered the 1963 Grey Cup parade. Today Mr. PG stands erect and silent at the junction of Highway 97 and Highway 16 but still welcomes all visitors to a Prince George that owes much to the forest industry.

Following the Mr. PG dance, at 6 p.m. over 70 dancers gathered in the hall for a buffet dinner. Lavinia Ouellet, longtime resident & square dancer of Prince George, made sure she attended
this wonderful dinner so she could visit with her square dance friends.  She was unable to dance due to an injury to her leg but she plans on dancing again by September. She very graciously hosted the Meyers for the entire weekend.

Jerry started pre-rounds at 7:30 p.m. This was followed with more square dancing from 8 until 10:00 p.m. Dancers from Kamloops, Williams Lake, Quesnel, the Lower Mainland and Vancouver Island kicked up their heels with a determination to meet their friends on the floor again, somewhere soon.

Square dancing is such a wonderful way to get your exercise in a ‘fun’ way and to do it with the friends you’ve made who all have this common interest.

Sandy & Merv have been invited to once again Call and Cue the annual Snowflake Dance in Prince George on November 1st. This will include some round dance (teaching) and square dance workshops in the afternoon. They are looking forward to this opportunity to do what they love most………. teach, call, cue and dance!